In honour of the Heuer Carrera’s 55th birthday, TAG Heuer has released a limited edition variant of considerable excellence, with the prestigious certification to show for it. Indeed, not only does the new TAG Heuer Carrera Chronograph Tourbillon Chronometer combine a tourbillon and chronograph complication to stunning effect, but it comes with a “Tête de Vipère” stamp of excellence. That makes it the first watch from TAG Heuer to earn the illustrious certification, which has been awarded by the Besançon Observatory to a mere 500 watches total since 2006. In other words: exclusive! 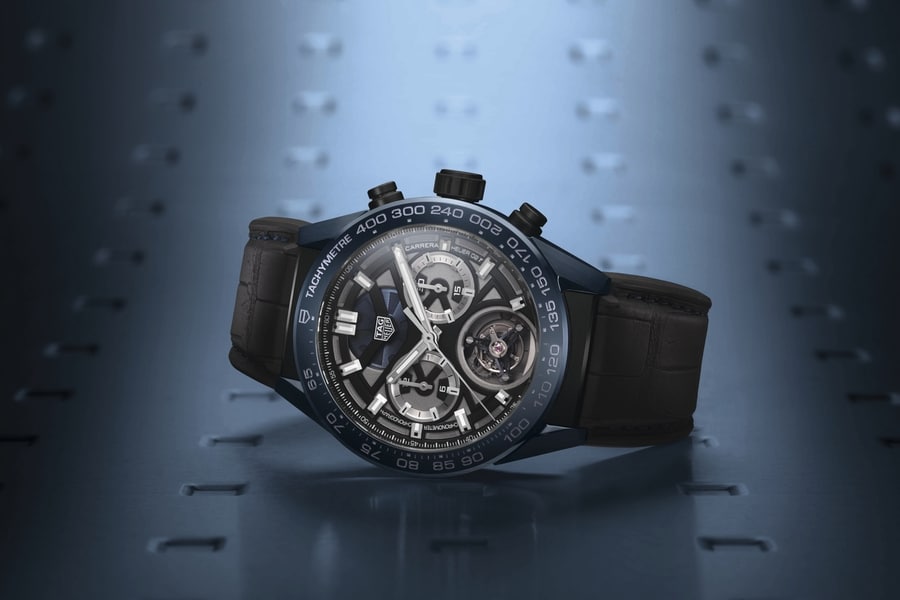 As one might expect, the TAG Heuer Carrera Chronograph Tourbillon Chronometer is nothing short of extraordinary. Housed within a ceramic case of midnight blue is a brilliant dial of Inception-like complexity, which exhibits the movement through a circular aperture. Flip the piece over, peer through the window of premium sapphire crystal, and you’ll notice a “Tête de Vipère” stamp on the bridge. Also featured are a ceramic bezel with tachymetre scale, ceramic lugs, blue accents on the movement, and a polished, brushed, and bead-blasted finish.

In order to achieve the coveted “Tête de Vipère” stamp, each fully assembled watch underwent 16 days of testing, in five different positions at three different temperatures. As such, the stamp indicates quality and expertise in movement and overall construction alike, making the TAG Heuer Carrera Chronograph Tourbillon Chronometer as close to perfect as a modern timepiece can get. Limited to 155 units, the watch represents one more notch in TAG Heuer’s already notch-ridden belt. The brand does go all the way back to 1860, after all.

Rolls-Royce Cullinan – The Jewel Of The Automotive World